On May 17 & 18th we had our annual big kite contest, Kitemasters 2009. This event is always at Crandon Park on Key Biscayne, and has evolved every year to a better and better event. Here is a link on the event:
Miami KiteMasters 2009

This year featured a full day of Course Racing and Freestyle, and the second day of the event was dedicated to a strapless contest! I was super stoked that Miami Kiteboarding, the host of the event, added the strapless aspect. The last event I competed in the regular free style division, which was tough to judge, so this time around they added strapless. The hosts asked me how I thought it should be judged and I suggested that rather than heats we should have a 45 minute expression session. It turned out to be a great success.

Before the event started I was out tuning up, and Big Ian had set up his slider as usual. Anyone who knows Big Ian, knows the guys is completely dedicated to wake style, and loves rails. So of course he owns one, and sets it up whenever he can. I knew that I wanted to get some rail slides on my skimmy in the contest so I thought I would get some practice runs. I hit the slider one or two times, and fell off pretty quickly. The tide was still a bit low so you had to ollie about a foot to get on the up ramp on the rail. On my next pass I was more aggressive on my ollie than I probably needed to be and when I landed on the up-ramp part of the rail I hear a massive crunching noise. I knew at that point my board had broken badly. It stuck into the corner of the up-ramp stopping me immediately on the rail. You know when when you are about to get beaten things slow down? Well, in that split second I tried to plan where I would take the punishment. I rolled my body and my Thigh/Hip area took a pretty good hit right on the rail. It was a pretty nasty explosion. Sometimes you are the hammer, and sometimes, you get hammered…. 😀

After I recovered my kite I checked my board the bottom was pretty mangled. I was so bummed. 🙁 That board has been with me for over 4 years, and is by far my favorite board that I have ever ridden. 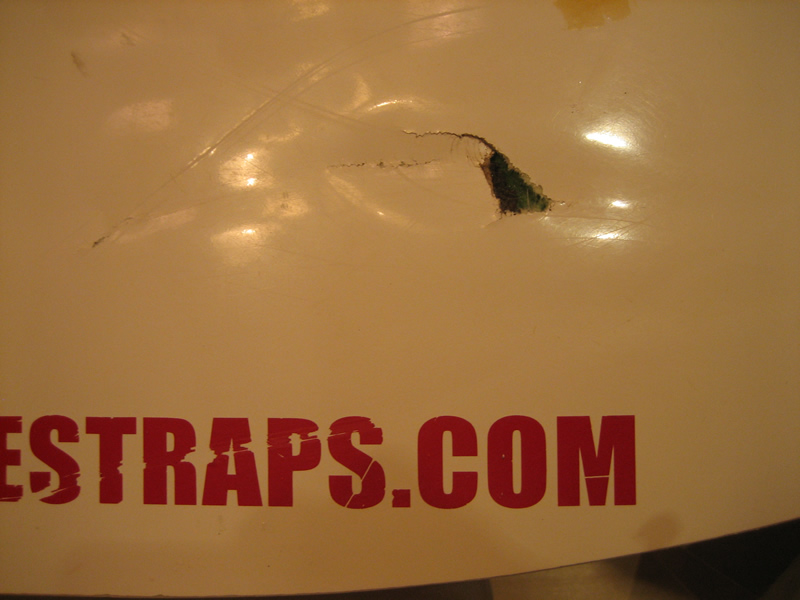 Here is a shot of my Skim as it exploded and stuck on the slider..

I went in for a while before the event started, and really didn’t think about my thigh. The event started, and we had a very good turn out of about 15 riders, all showing off for the judges in a massive expression session. Unfortunately, Jon Modica hurt his knee on Saturday landing a Mobe, and was forced on the sidelines to judge the event. Fortunately, I had my back up skim with me so I was able to compete. I have some video footage of the event that I will post when I get some time. Overall, I was very pleased with the turnout, and I think everyone had a great time that competed. There were a lot of riders that took notice of the strapless aspect during that weekend, and I think more people might think about trying some strapless soon.

After the event I noticed my hip had swelled up pretty good. It turns out I got a pretty nasty Hematoma.

Here is a shot of the grapefruit on my hip right after the event: 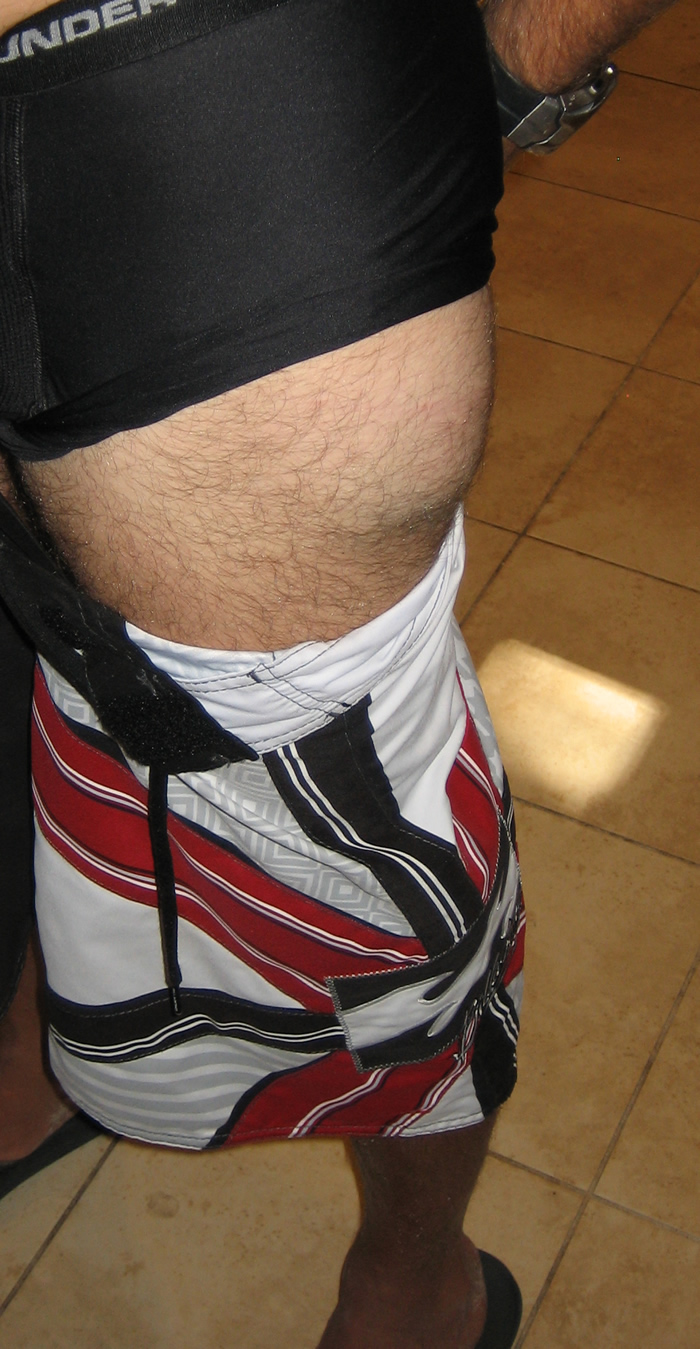 Ever had a grapefruit grow out your thy? Not comfortable 🙂

Here it is a few days later, bigger than it was when it happened: 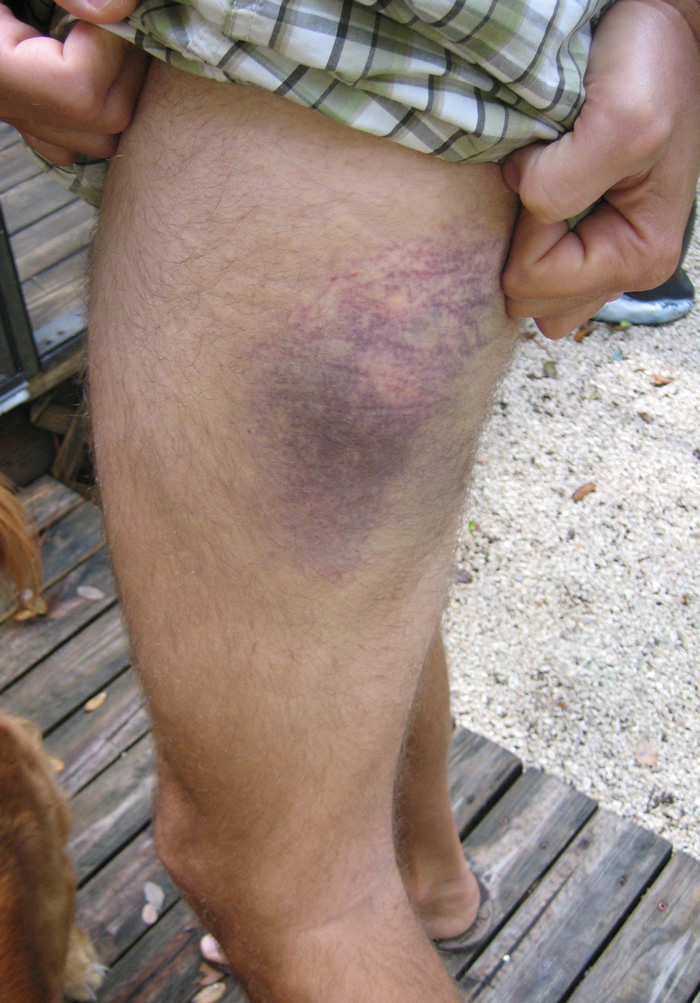 Yummy. Can you say hamburger?

Here it is a week later, and still swollen.. 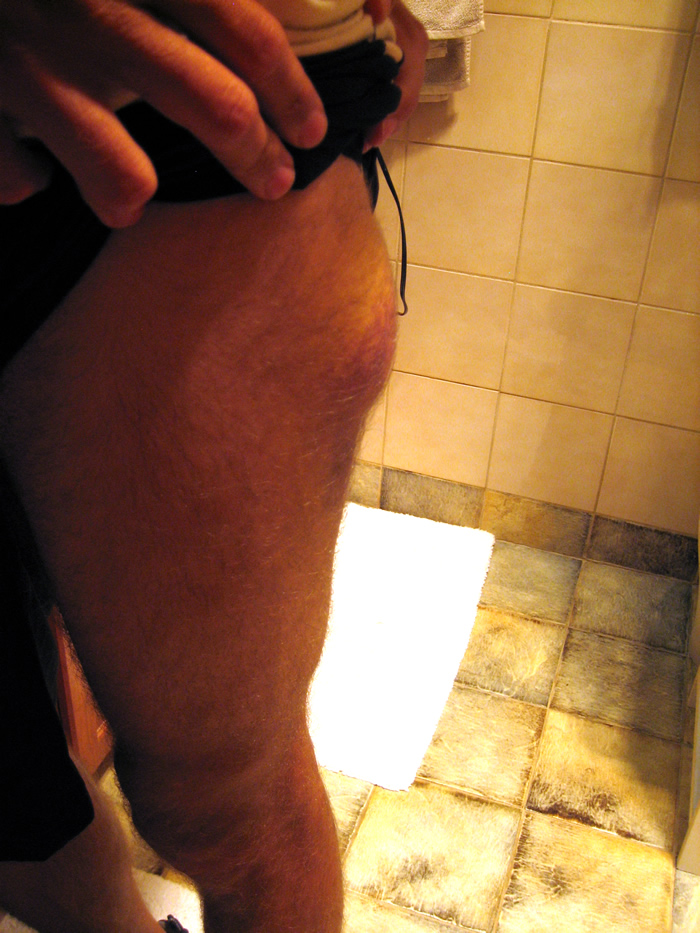 One week later... I think it wants to stay with me...Maybe I should name it?

It is now finally about the size of a lime. I have had many injuries, but I have never gotten this bad of a bruise. From what I have read and heard it takes about 3 weeks to go down.

I have to say that knowing what I know now, I would not have done anything different, and I did hit the slider again in the event. Probably just stupid that way…. 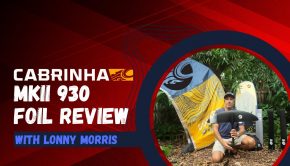