Moona Whyte knows how to rip. Check her shred one of the best lefts in the world at One Eye,

Let me take you on a small journey. This is what its like to kitesurf out on the Great Barrier 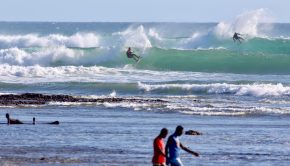 Traveling the world isn’t always fun and games. The end result, more often then not, is worth all the hassle.